We added a Jobs Category! Find out more.
Art & Artists
Two Artists and a Curator Confront Homelessness in L.A. Together 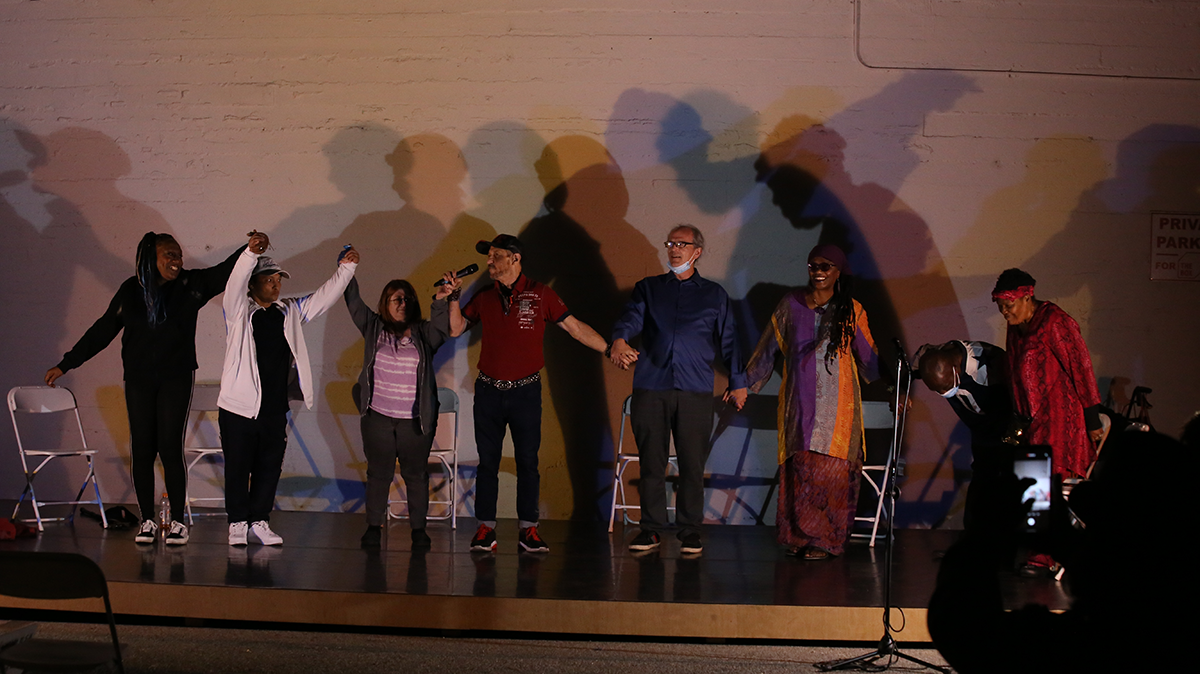 Two Artists and a Curator Confront Homelessness in L.A. Together

For two artists and one curator— Corazón Del Sol, Chloë Flores, and Jay Carlon—all of whom have family members who have experienced homelessness, the crisis is especially urgent.

Corazón Del Sol: A Dream of Beautiful Housing for the Unhoused

Artist Corazón del Sol was living in Boyle Heights in Los Angeles when her neighbors on both sides of her were evicted.  del Sol tried to help them find new housing, but even with vouchers to help defray the cost of rent, there was simply no inventory they could afford. All the rents had doubled.

“I just felt like there had to be a solution,” del Sol said.

For del Sol the issue of housing access and affordability is intensely personal. During her childhood, del Sol’s father experienced homelessness and she has other family members who have been or are currently unhoused.

“There is nothing more painful than having a family member homeless,” del Sol said, “You never know if the person is going to live or die.” 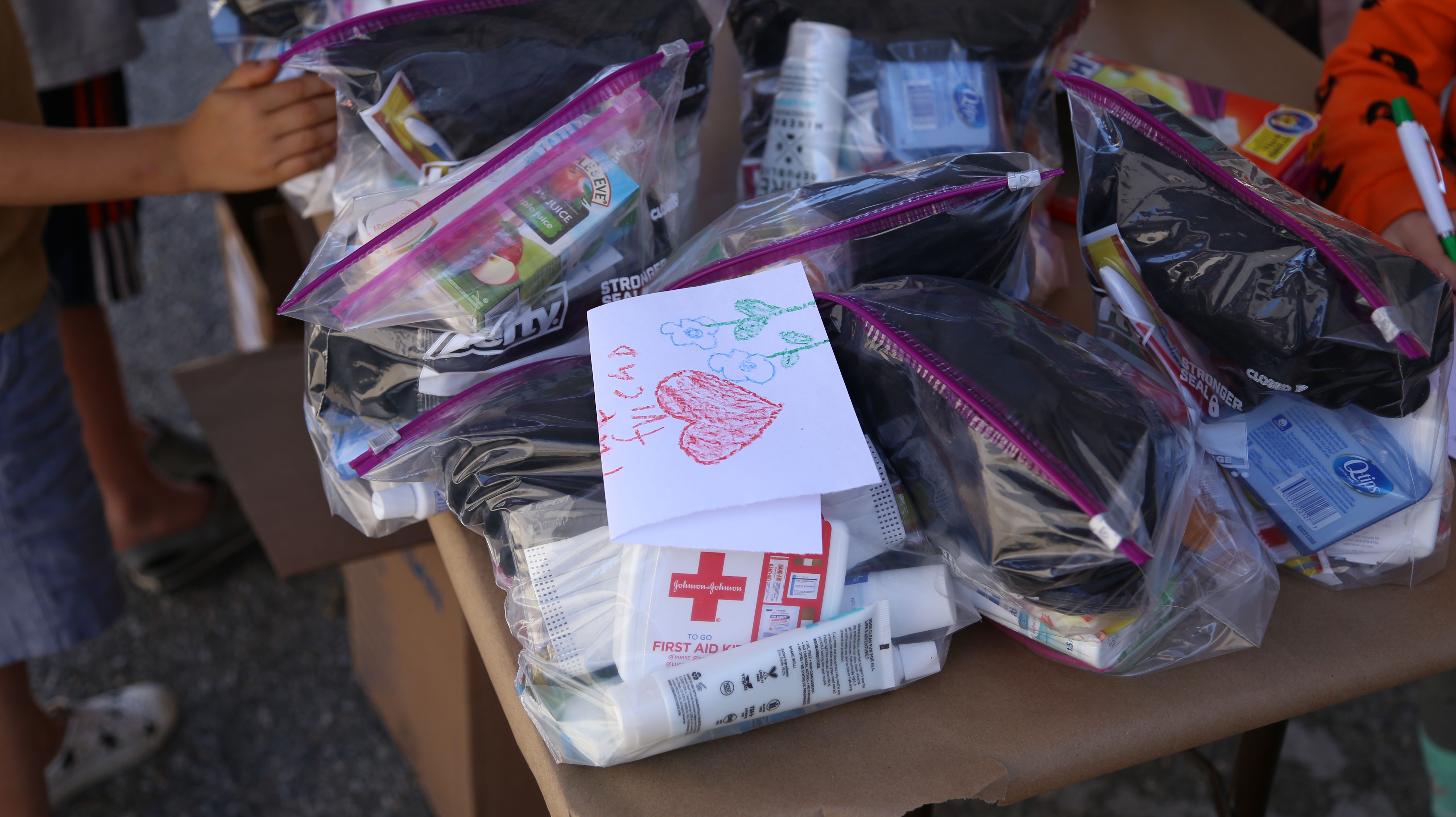 Determined to find affordable housing for her neighbors in Los Angeles, del Sol began to explore the possibility of helping them buy a trailer, but all of the options were surprisingly expensive and the available trailer parks were ugly, unpleasant, and run-down. It was then that del Sol first had the idea: why not make a beautiful trailer park, with beautiful modular homes for people experiencing homelessness; a place that fosters and facilitates wellbeing and community.

del Sol partnered with a friend who is an urban planner and they quickly found an architect to work with. They were soon stymied though, by the Los Angeles permitting process. “I was discouraged,” del Sol said, “And I put it down.”

But just before the start of the pandemic del Sol started researching how to make her dream a reality, again. Then a friend said he wanted to partner on the project. His company would donate 10 acres in Lake Los Angeles for the project that del Sol was calling “Jardin del Estrellas” — Garden of Stars. It felt like everything was lining up. 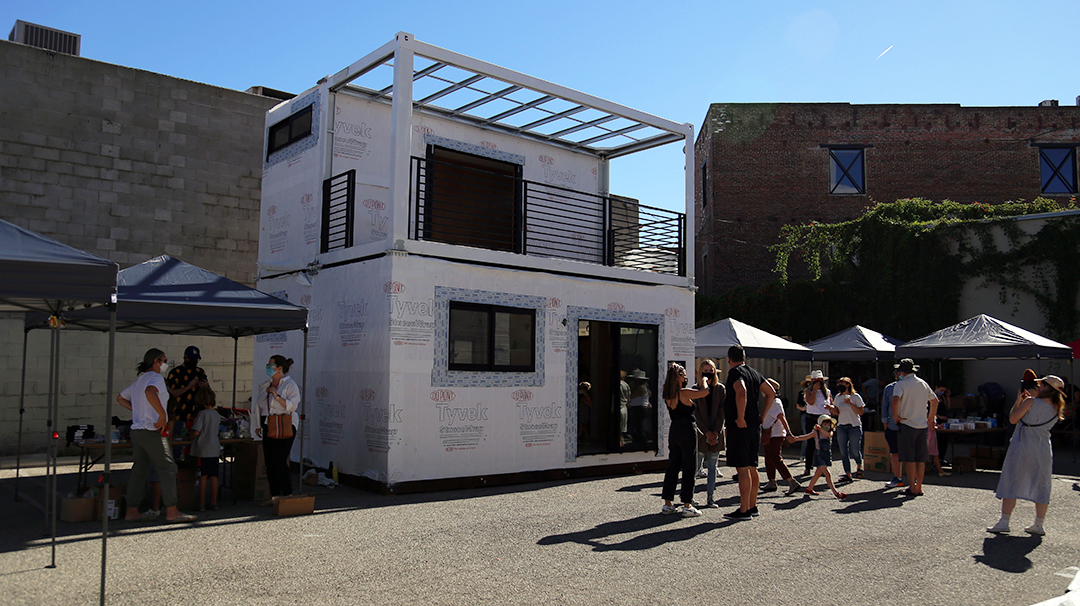 Chloë Flores: What is Home in a City of People Experiencing Homelessness?

Chloë Flores and del Sol met at the holiday party of del Sol’s gallerist, and their mutual friend, Mara McCarthy.

“She was holding court with her dogs in the living room,” Flores recalled of their meeting, “It was love at first sight.”

Flores and del Sol bonded quickly over their shared experiences and identities. Like del Sol, Flores has had unhoused family members. They also both identify as Native American.

Flores is a writer, curator, and arts producer based in Los Angeles. She is the co-founder of the GuestHaus Residency and homeLA an organization that partners with people and communities who provide their home or space as a platform for artists to produce site-sensitive performances. 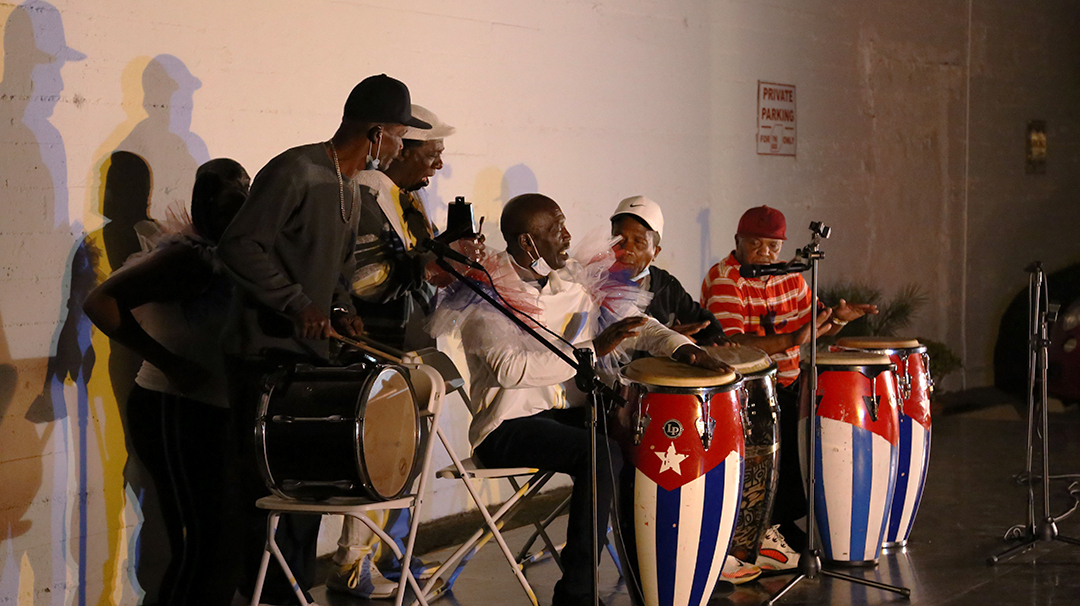 Even before the pandemic and the attendant increase in homelessness, Flores was thinking about what “home” really means in a city with so many people experiencing homelessness.

“I was very well aware that you can’t have a project about home in Los Angeles without addressing homelessness,” Flores said.

It was a subject Flores discussed at length with del Sol during their weekly walks around Echo Park Lake and Mt Washington. As del Sol shared her vision for Jardin de Estrellas, it felt to Flores like kismet.

She knew she wanted to collaborate with del Sol on the Jardin de Estrellas project.

Jay Carlon thought he’d give up dance when he moved back to Los Angeles in 2014, but then the founder of homeLA, Rebecca Bruno, asked him if he wanted to work with homeLA. With the opportunity to create site-responsive performances in non-traditional spaces, Carlon felt inspiration return.

Like Flores and del Sol, Carlon has a deep relationship to homelessness and displacement. Carlon is Filipino American and from a migrant family. His father followed the harvest as a strawberry picker in California for 50 years. And his older brother was unhoused until he was found dead in Little Tokyo in March of this year.

This past year, Carlon was working on a dance film called “Baggage” about intergenerational trauma. In the summer, Carlon began working on two new projects in collaboration with Flores, del Sol, and McCarthy. A prototype of the modular Jardín de Estrellas home was installed in the parking lot of The Box Gallery (which was founded by McCarthy). With the support of Flores and homeLA, Carlon created a site-specific performance, called "Grief in Liminal Spaces," which can be viewed on Youtube. He also participated in homeLA’s event, The We in Me: Embodying Empathy, where he was a panelist and presenter.

His performance made use of the architecture of the modular home. As part of the rehearsal process, he traced the space with his body, journaled about the experience of being in the space, and then developed his performance out of what emerged.

Carlon hopes the performance will be inspiring and healing for those in the community who have experienced displacement, but he hopes it goes beyond that, too.

“I’m trying to figure out how my work as a performance maker can bridge into choreographing community,” Carlon said, “Not just inspiration. What is the action?” he added. 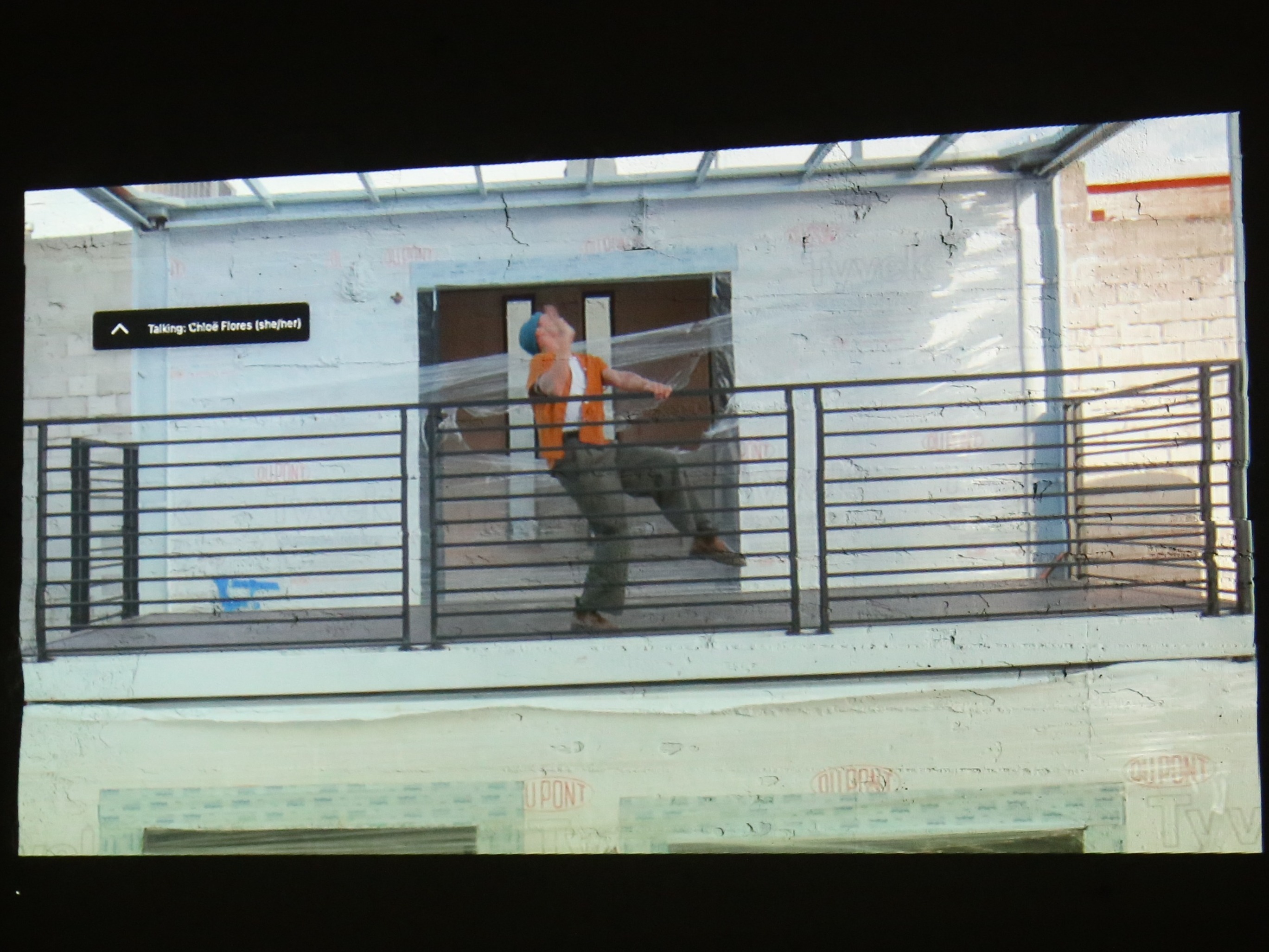 Carlon wrote of his artistic process:

“When I entered the Jardin de Estrellas model home at the Box Gallery in October to create a dance film, I realized that I wasn’t ready to revisit the passing of my brother Albert Carlon, who had been found dead around the corner from this site just 6 months prior while living in the streets. It was a cold night in March 2020, so it is just assumed that he died from the cold.

I thought of the unhealed wounds that my family had been experiencing with Albert and his issues with addiction, mental health and incarceration. The creative process while making this dance became a scary place for me to confront my own issues with complacency, acceptance, empathy, and care.  I kept thinking I could have saved my brother, but I feared bringing him back into my life.  I began to feel hopeless.

Coincidentally, I had been in-between homes and searching for a new living situation and realized how destabilizing it can be without planting roots down.  And though my situation was quite privileged, I started to realize how important stability is when it comes to having a home.  The dance film, “Grief in Liminal Spaces” is a snapshot of me processing the loss of my brother, care for the community, searching for a home, and imagining a more empathetic future.”

In early November, homeLA hosted an event called “The We in Me: Embodying Empathy.” The event was a pilot education program that considers homelessness through the lens of empathy and civic engagement. It took place in The Box’s large rectangular parking lot and showcased a two-story model home from del Sol’s Jardin de Estrellas.

del Sol, Flores, and Carlon all participated in the event along with a number of other artists and civic leaders. The guests were led through an embodied practice by Carlon, who choreographed “our perception towards empathy.”

You can watch the event in its entirety here. 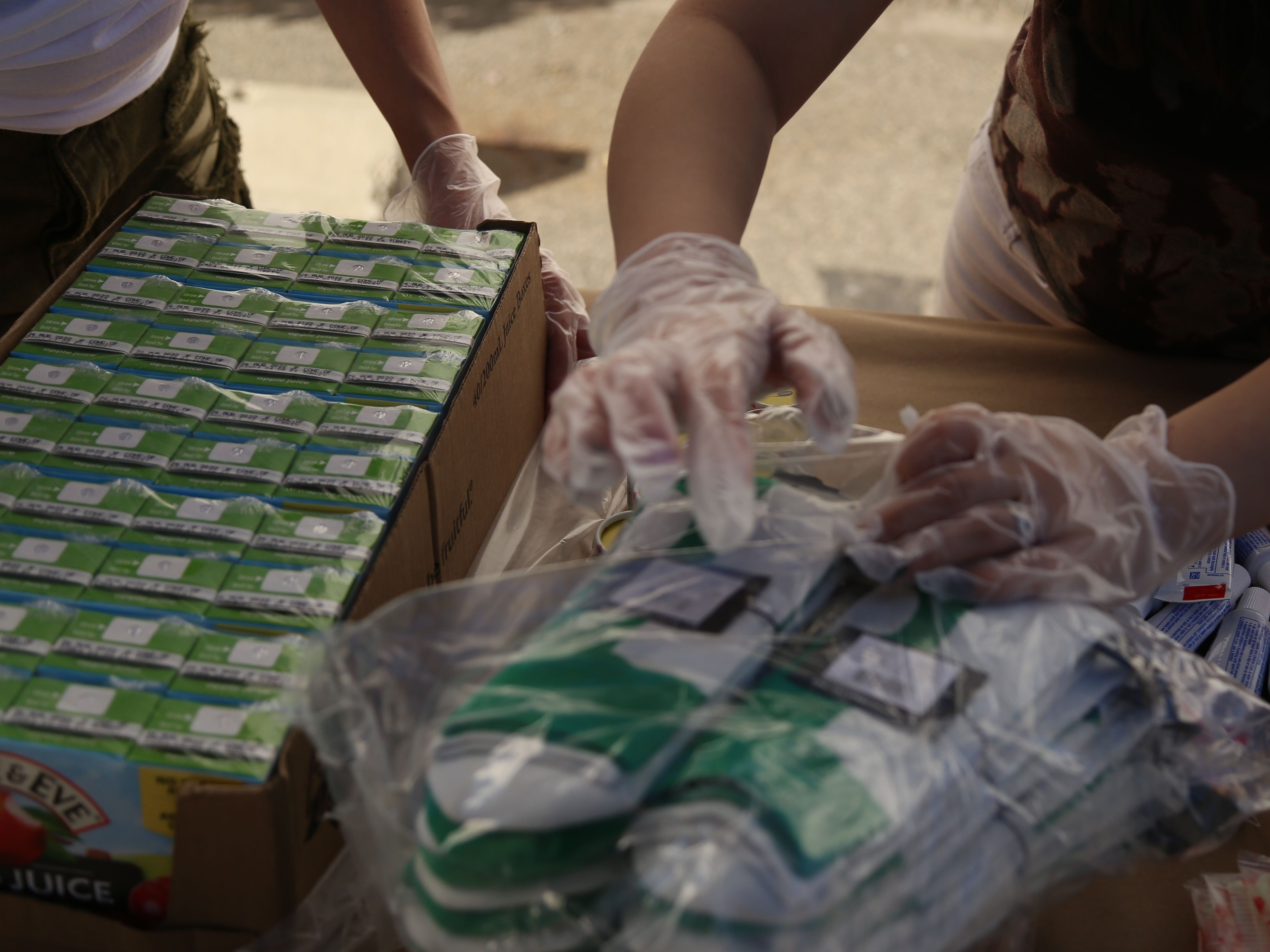 del Sol, Flores, and Carlon’s individual projects to address homelessness are still ongoing, as is their collaboration.

Flores hopes to develop more educational programming as part of “The We in Me” series.  del Sol meanwhile is still exploring her options for where she can build her Jardin de Estrellas project.  She’s optimistic about bringing her vision to life. An assemblyman in Compton recently reached out to her, and she’s hopeful that the city will agree to do a pilot of her project there.

Meanwhile, del Sol and Carlon continue a tradition of serving lunch weekly on Skidrow, something del Sol has been doing for years.

“I look at those people, and I’m like that’s my dad, that’s my brother, that’s my grandma, that’s my aunt.,” del Sol said.

Emma McAleavy, Listings Project's Content Editor, works to bring the stories of our community to life. Emma’s writing has also appeared in The New York Times, Outside Magazine, and Architectural Digest. You can follow her on twitter @emmamcaleavy.